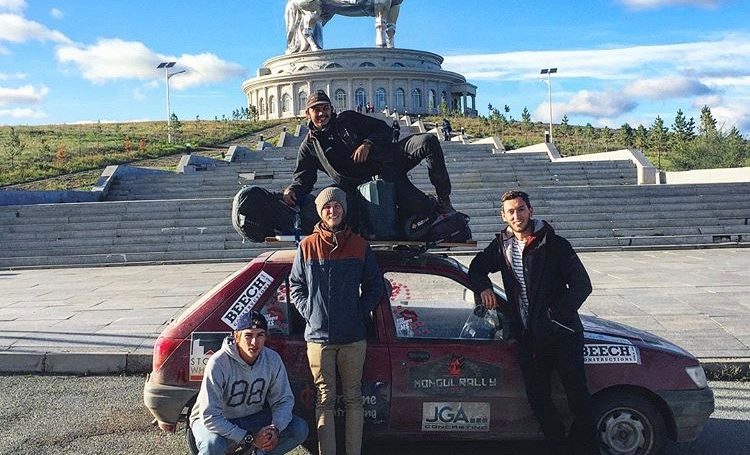 The Lords of the Shoey

An around the world trip with your friends?! Who wouldn’t love that? Four Aussie guys. aka. ‘The Lords of the Shoey’, set out on the ride of their lives on 14th July, all in the name of Kiss Goodbye to MS. Lachlan, Daniel, Cameron and Jasper are all old friends and always dreamed of doing something adventurous and meaningful on an epic scale, something way out of the ordinary! The Mongol Rally (not to be confused with the Mongol Derby) was on their radar for a couple of years, but with life getting in the way, they could never seem to make it work. Until this year! The idea of it being such an epic adventure, but also, helping those in need at the same time, it was one hell of a ride that they couldn’t resist.

Beginning in Europe and ending in Ulan Ude, Russia, the race is a marathon car rally that sees participants cross 16,000km of mountains, desert and steppe across 25 different countries. The Mongol Rally has become one of the world’s most highly-regarded and aspirational travel adventures, with three fundamental rules: each team must raise money for charity – a minimum of $1650 AUD, have no on the road back up or support (you’re completely on your own!) and drive a farcically small car. And when they say a farcically small car, they mean it. They can take any car as long as it’s relatively clapped out and with an engine of 1 litre or less!

The guys were left to their own device to forge their own life changing adventure! None of the guys had any experience working with cars, so the rally definitely tested their abilities, as there is a big difference between textbook solutions and real life solutions.

You might wonder why they called themselves ‘The Lords of the Shoey”? Inspired by Motorsport icons like Daniel Ricciardo and Mark Webber who are drinking from a shoe to celebrate their big race wins, a ‘shoey’ has historically been performed as both a bringer of good fortune and as a hazing punishment – a form of talisman to great motor-sporting endeavors if you like, so naturally adopting the ‘Shoey’ as part of their brand for the Mongol Rally seemed logical in a sense.

With no back up, no support and no set route, the four friends finished their cross-continental road trip after 12 weeks of eating, driving, sleeping and arguing in their tiny little car and raised $20,489 for Kiss Goodbye to MS! Thank you so much, we hope the celebratory bubbly at the finish line tasted extra nice out of your shoes!